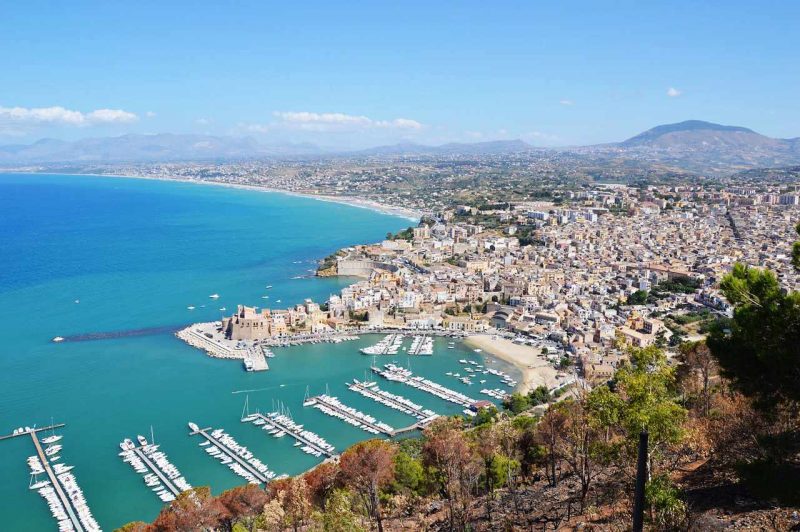 Catania is a port city in Italy, which lies at the foot of Mount Etna. The city is located on the east coast of Sicily and due to the proximity of the volcano, the lands around the city are very fertile and fertile. That is why Catania is known for growing many varieties of grapes from which wine is subsequently produced. The highest active volcano in Europe. Etna has an area of ??at least 1250 km2. Scientists and historians believe that the volcano erupted more than 200 times. Since the 5th century, about 80 major volcanic eruptions have been recorded. One of the strongest eruptions occurred in 1669 and completely destroyed the city, but Catania was revived like a Phoenix from the ashes. Apparently, this situation happened seven times, and each time the inhabitants of Catania do not give up and each time rebuild their city. The patron saint of Catania is Saint Agatha, also called Agatha Sicilian. Patron of Catania, she was born in 234 in Catania and came from a prominent Roman family. When she accepted the Christian faith, she decided to dedicate her life to God and live in virginity. When she rejected the hand of Quinciana, the governor of Sicily, a vengeful avenger, he gave her to the house of debauchery. Despite this, she did not lose her virginity and rejected Christ. The worst was yet to come. When Emperor Decius began persecuting Christians, Quincian was the first to be put on trial by Agatha. After long and cruel torture, she died, thrown on hot coals. A year after her death, Etna erupted, but the flowing lava stopped right outside the city. Since then, she has become the patron saint of Catania.

A holiday dedicated to the patron saint of the city, which lasts more than a week. The celebration begins on February 5, the day Saint Agatha died a martyr. The most important event of this holiday is the 24-hour procession with the majestic, richly decorated figure of St. Agatha. The figure is drawn to men and boys dressed in traditional white robes called “sakko” and black hats. The streets during Festa Di Sant’Agata are crowded with cannalores or large candles. Traditionally, all people who come from Catania come to their homeland to take part in the festive celebrations.

The beautiful and magnificent square is one of the biggest attractions of Catania. It is surrounded by majestic Baroque buildings. Next to the square stands a monumental baroque cathedral. It is in it that the relics of St. Agatha.

Built on the site of a former Greek theatre, the Romano Theater was built in the 2nd century AD. Apparently, lava from Etna was used for its construction. This beautiful place is not just a monument, because festivals and concerts are held here in summer. Art in such places has a unique impact on the audience.

Beautiful gardens located in the center of Catania. The large fountain will allow you to refresh yourself in the shade of soothing greenery. In the gardens, a certain date is set daily from flowers.

It was in Catania that the famous composer Vincenzo Bellini, the creator of the famous opera Norma, was born. And beautiful Catalan gardens were erected in his honor.

8. The elephant is the symbol of Catania Interestingly, the elephant is the symbol of this city. It is difficult to say why this animal has become a symbol of Catania, but you can guess. Probably, the small distance to Africa, where these large, majestic animals come from, had a significant influence on the decision on the symbol of the city. We know that during the Punic Wars, Hannibal used elephants and although he attacked Rome from the west, passing with them through the Alps, no doubt the echoes of these events also reached Sicily, which was in the midst of this conflict. Interestingly, Piazza del Duomo has an 18th-century fountain with an elephant. On its crest is an Egyptian obelisk that points to even more exotic influences in this Sicilian city.

Kiosks where you can taste delicious and refreshing drinks such as il seltz or limone e sale. Worth a visit to not only quench your thirst, but also to get to know the flavors of Sicily and, above all, Catania.

The most famous dish, Pasta alla Norma, was, of course, named after the Bellini opera that came from Catania. This is a dish that combines pasta, eggplant with cheese, basil and tomatoes. For lovers of Italian cuisine, it will be like a trip to paradise. The taste of the dish perfectly reflects the climate of Catania and all of Sicily. The city has many cozy pubs serving Pasta alla Norma. Eating this dish in this city will be amazing, not just culinary.