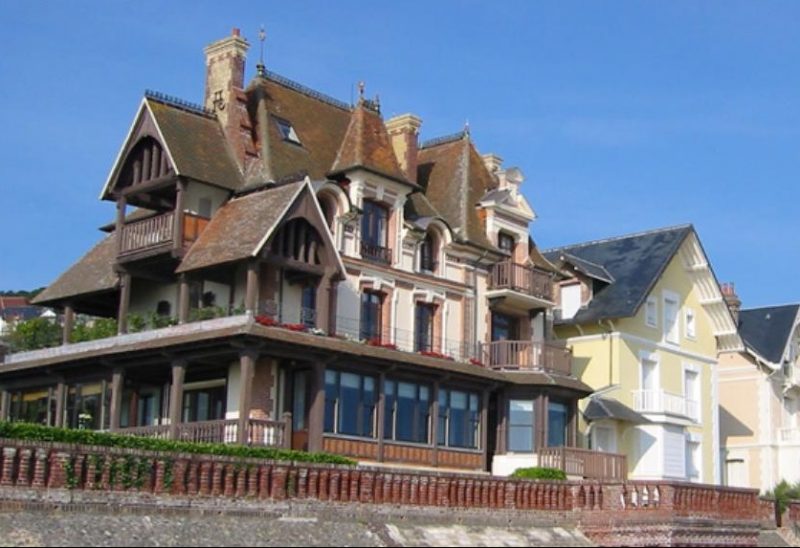 One ??hundred years ago, Houlgate, 15 km west of Deauville, was as charming and inviting as its neighbors. But a lot has changed since then. Its long beach is still flanked by Victorian villas, while commercial enterprises are crowded along a narrow parallel street – Bannaya Street – which stretches only 50 m into the interior of the continent. Now Houlgate is the calmest of the local resorts and is ideal for families. The only question that may be difficult for you to resolve is: which is better to choose – boating or playing mini golf.

In Houlgate, there are only a few cultural attractions and some are worth visiting. Behind the central part of the beach, the first building you will notice is the Grand Hotel. It was built in 1859 and is of paramount importance in promoting the village to tourists. The impressive brick and stone building was enlarged in the 1890s and the large domed tower on the right side was added 10 years later. Around the same time, a town hall was built in Houlgate, and many small hotels, along with casinos, have always been a popular destination for vacationers in the resorts on the Normandy coast. Also at this time (circa 1870-1900) many beautiful villas were built and they give the resort an unusual charm. Styles range from gothic to modern. The tourist office is located near the sea. The tourist office has a good map of the city that highlights some of the best villas, including Villa le Castel, a beautiful New Norman style villa with pointed roofs and lots of decorative brick and woodwork. There are also some older medieval buildings such as the House of the Caves and the lovely Moulin Landry. These two buildings are in a quiet side street behind the train station and a bit away from the rest of the city. Don’t forget to visit them because they are really charming. It is also worth stopping by the covered market in Houlgate for fresh food and fish.

Hostellerie Normande is located just behind Bath Street. This small, pretty inn is surrounded by ivy and other creepers. A set of dishes costs 14 €, which includes fish soup and a plate of fried mussels. Above the cliffs of the Black Cows, on a mountain road east of the mountains, is La Ferme Auberge des Aulnettes. The hotel is located in a beautiful country house among chic gardens. There is a good restaurant and a veranda where you can sit in the evenings. The best campsite in the area is Les Falaises near the city. There are several good restaurants in the city. L’den has two styles: classic or winter garden atmosphere overlooking the kitchen. The chef prepares traditional dishes with love, which are very tasty and satisfying. The delightful hall of the Marcel Proust restaurant awaits those who are looking for a way to pass the time. The Grand Htel Cabourg restaurant still favors muniere, red mullet fillets and rabbits.