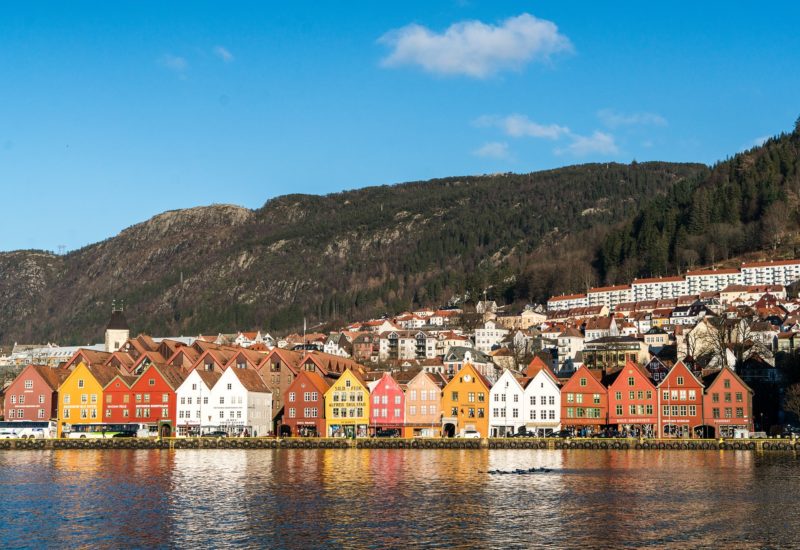 Norway is well known as one of the richest and happiest countries in the world, but did you know that Norway also has the highest waterfall in Europe?

1. The official name of Norway is Kongeriket Norge (Kingdom of Norway).

3. The national symbol of Norway is the lion.

4. The total area of Norway is 323,802 km2, which includes the islands of Bouvet, Jan Mayen and Svalbard.

5. The flag of Norway is red with a blue cross on a white background crossing the ends of the flag. The colors are reminiscent of Norway’s old political ties with Denmark (red and white) and Sweden (blue).

6. The currency in Norway is the Norwegian krone, NOK.

7. Alcoholic drinks in Norway can only be bought in stores called Vinmonopet. There are only two in every city and none in the countryside.

8. Modern skiing originated in Telemark county in the 19th century, but ancient rock art at Rodoy in Nordland shows that Norwegians were already using skis 4,000 years ago. The oldest excavated ski is 2,300 years old and is located in Finnmark in the far north of Norway.

9. In 1251, Henry III of England received a polar bear from the King of Norway. He kept it in the Tower of London on a long chain so that he could swim in the Thames.

11. Norway has the largest concentration of fjords in the world. Two of them, Geiranger Fjord and Nroy Fjord, are included in the UNESCO World Heritage List.

12. The highest mountain in Norway is Galdhopiggen. Its height is 2469 meters.

13. Laerdal Tunnel is the longest road tunnel in the world, its length is 24.5 km.

14. The northernmost point of Norway and Europe is the North Cape.

15. Kirkenes in Norway is as far east as Cairo, further east than Finland, and only 15 kilometers from the Russian border.

16. The Nobel Peace Prize is awarded in Norway by the Norwegian Committee.

17. Norway was a founding member of the United Nations in 1945, and the first UN Secretary-General was Norwegian Foreign Minister Trygve Lie.

18. The famous and expensive Voss Water is only available in Yveland, Norway.

20. IKEA names sofas, coffee tables, bookcases as places in Sweden. Beds, wardrobes and furniture in Norway. Carpets by location in Denmark and tables and chairs by location in Finland.

21. It is forbidden to die in Longyearbyen, because bodies are not buried there, because the eternal frost in the city does not allow them to decompose.

22. Norway is the world’s leading producer of salmon and the second largest seafood exporter in the world.

24. Frozen pizza is the unofficial national dish of Norway.

25. The Norwegian cheese slicer hasn’t changed much since its invention in 1925. In 1925 Thor Bjorklund invented the cheese cutter in Norway.

26. Beerenberg at an altitude of 2227 m on the island of Jan Mayen in the Norwegian Sea is the only active volcano in Norway.

27. The word “slalom” comes from Morgedal, Norway, where ski designer Sondre Norheim lived. The first syllable “sla” is “slope, hill or smooth surface” and “lam” is a path down the slope. The usual slalom went through fields and hills.

28. Norwegian Eric Rothheim was the forerunner of the can and the aerosol system known as the aerosol can. On October 8, 1926, he received a patent for his invention in Norway.

29. The official Christmas tree in Trafalgar Square in London comes from Norway. It has been imported every year since 1946.

30. Grimstad, Norway, was the home of playwright Henrik Ibsen and also the sunniest place in Norway.

31. In the 1870s and 1880s, Sondre Norheim from Telemark began using rigid ski bindings that allowed him to jump without falling.

33. Norway is not an official member of the European Union as it withdrew in a referendum in November 1994.

34. Norway had a major impact on Western civilization during the Viking Age, which was usually the result of looting.

36. King Harald of Norway swore not to marry for life unless he could marry his true love, the daughter of a cloth merchant.

37. Norway hosts the world’s largest public fund, which saves almost all the money it makes from the sale of crude oil and is valued at nearly a trillion dollars.

38. The Lofoten archipelago in Norway is located north of the Arctic Circle. However, due to the world’s largest positive temperature anomaly relative to latitude, it is teeming with life and has the largest deep-sea coral reef.

39. Norwegian plateau Hardangervidda – the largest mountain plateau in Europe with the largest herd of wild reindeer on the continent.

40. Exiled from Norway and then expelled from Iceland for three years for murder, Eric the Red went with 25 ships to Greenland in 985, where two communities arose.

41. Norway gets 98% of its electricity from hydroelectric power, more than any other country.

42. The relative number of English speakers in Sweden, Norway, Denmark and the Netherlands is higher than in Canada.

43. The Norwegian government imposes high fuel taxes to encourage people to leave their cars at home and use public transport.

44. Norway has the highest gasoline prices in the world, although Norway is one of the largest oil exporters in the world.

45. Edvard Munch was a Norwegian painter and graphic artist, famous for his painting. He created the painting “The Scream” in 1893.

47. According to the Global Peace Index 2013, Norway is one of the most peaceful countries in the world, ranking 11th out of 162 countries.

48. The most famous act of resistance in Norway during the Second World War was the sabotage by members of the Scottish-trained Norwegian military resistance at Rjukan, Telemark, in February 1943.

49. The first king of Norway, Olav Haraldsson, was killed by an alliance of farmers and landowners in Stiklestad, Norway’s first big battle for land.

51. Troldhaugen is home to the composer Edvard Grieg and an aquarium with the largest collection of marine fish in Europe.

52. In order to encourage more men to take on a larger share of caregiving responsibilities, Norwegian law provides that 14 weeks of parental leave is granted to fathers. Norway is the first country to introduce mandatory parental leave.

53. In 1999, Norway granted asylum to an American drug smuggler because the Norwegian Supreme Court ruled that US prisons did not meet “minimum humanitarian standards”.

54. Norway has won the most gold, silver and bronze medals of any nation at the Winter Olympics.